The Weichai LanQing engine has become known to everyone and is the key decision-making product of Weichai brand strategy. The so-called â€œLanQingâ€ is a transliteration of the English word â€œland kingâ€ and is taken as the â€œking of the landâ€.

According to reports, Weichai Lanqing is an engine developed by Weichai Power to meet higher standards, higher quality, and higher horsepower. In 2003, it began to develop globally with AVL Austria and international suppliers of spare parts. The brand-new products built on the cutting-edge technology, the successful prototype development in 2004, and experienced three years of 2005-2007 test validation, and finally in 2008, Lanqing diesel officially listed in large quantities, and now the Weichai Blue Engine series has become the world's top Power representative.

Today, Weichai WP10 and WP12 have been developed to the fourth generation, and a new product WP13 has been developed on the basis of the technology of Weichai Blue Engine, which has a larger displacement, stronger power, and better performance.

Weichai Lanqing WP10 is a high-power engine with completely independent intellectual property rights. The biggest change in the fourth-generation engine of WP10 LanQing is the increase of torque, which is increased from the original maximum torque of 1500NÂ·m to 1650NÂ·m, and the power is stronger. 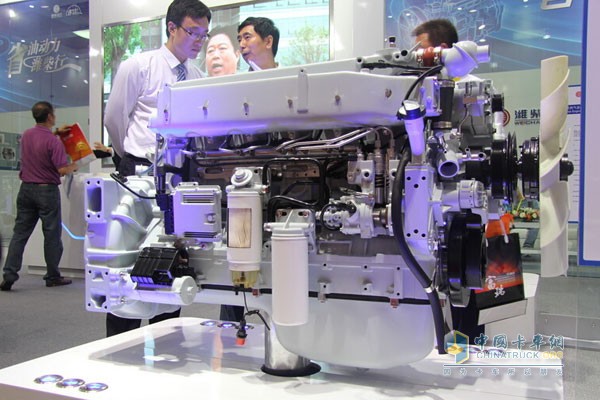 Based on the WP10 two-valve diesel engine, a more competitive four-valve structure has been developed, which has higher combustion efficiency, maintains the versatility of original parts, is easy to maintain, and has better matching; it also uses innovatively. The new automatic tensioning wheel train is more convenient for assembly and maintenance, and the belt transmission efficiency is higher. The built-in thermostat mechanism reduces the leakage point of the engine and improves the reliability of the engine. Due to various optimizations, the minimum fuel consumption rate of the engine is also reduced from 191g/kwh to 187.5g/kwh, and the fuel economy zone is expanded from 1300r-1500r to 1100r-1700r, and the fuel consumption is more fuel-efficient. The WP10 LanQing fourth-generation engine fully meets the National IV emission standard and is now widely used on the market for heavy-duty trucks. It is currently one of the most widely used state-four heavy-duty engines on the market. 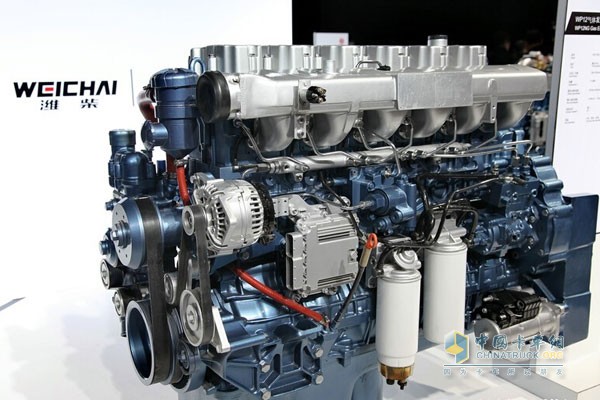 In order to meet higher-level emission requirements and reduce the fuel consumption costs in use, Weichai has developed a WP12 blue engine based on the WP12 to meet the national five emission standards. The main advantage of the four-valve engine is that it can effectively improve The intake and exhaust flow area increases the intake and exhaust efficiency, reduces the loss of pumping gas, improves the economy of the engine, and reduces the weight of a single valve, which can contribute to the effective movement of the valve. The innovative design of the spark plug center design shortens the flame propagation distance, reduces the tendency of knocking, and improves thermal efficiency and economy. It is understood that at present, the Weiqi Lanqing WP12 used by SAIC Iveco Hongyan's natural gas tractors is highly rated by users. 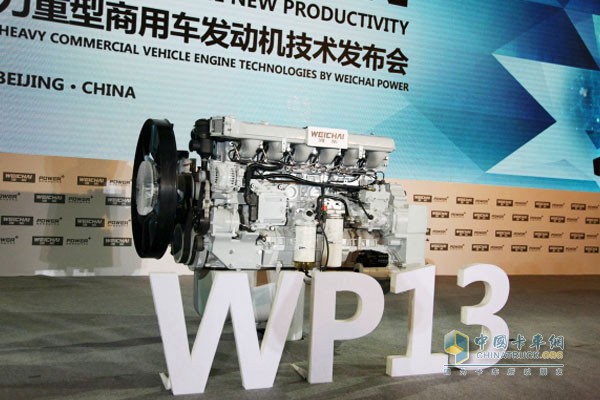 The Weichai Lanqing WP13 series engine was officially launched in January 2015. It was designed and developed on the basis of the original Weichai Lanqing WP12. In addition to the increase in bore diameter and stroke, the crankshaft, piston, and the airframe were redesigned, and the rest of the components and the WP12 engine the same. WP13 modeled on WP12 will be effectively guaranteed for reliability, and it will be more convenient to match and upgrade the entire vehicle product. The maximum displacement is 12.54L, the power is 480-605 hp, and the 550 hp engine can achieve a maximum torque of 2500N.m between 1000-1300 rpm. It has the characteristics of low rotational speed and high torque. At the same time, the life of B10 can reach more than 1.2 million kilometers, which has a great advantage in competing products. According to Feng Gang, Vice President of Weichai Power, with the development of high-speed marking trends, the market share of high-horsepower engines is expected to reach 35% in 2020, and the WP13's glory will be just around the corner.

The machine is widely used in pharmaceutical, chemical , foodstuff industries, etc. It can crush various of material.

The machine is made of feeding material part and crush part, and dust collect part. Its configuration is very briefness , all the parts which contact the material are made of stainlesss steel.